Kevin Turrisi Celebrated for Excellence in the Telecommunication Industry 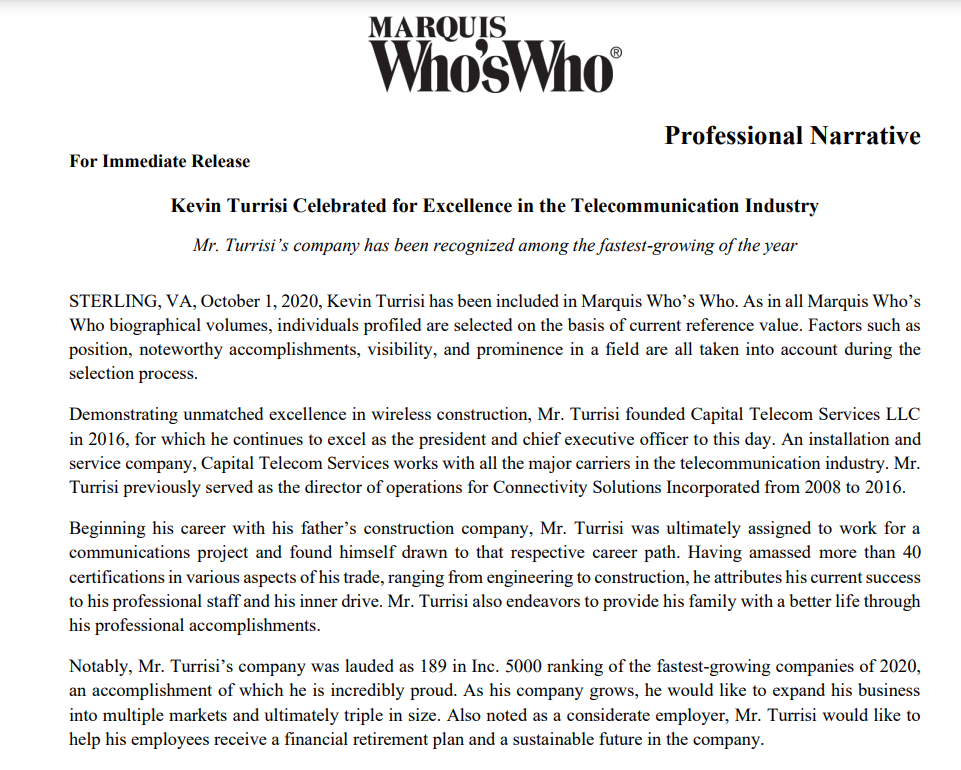 Mr. Turrisi’s company has been recognized among the fastest-growing of the year

STERLING, VA, October 1, 2020, Kevin Turrisi has been included in Marquis Who’s Who. As in all Marquis Who’s Who biographical volumes, individuals profiled are selected on the basis of current reference value. Factors such as position, noteworthy accomplishments, visibility, and prominence in a field are all taken into account during the selection process.
Demonstrating unmatched excellence in wireless construction, Mr. Turrisi founded Capital Telecom Services LLC in 2016, for which he continues to excel as the president and chief executive officer to this day. An installation and service company, Capital Telecom Services works with all the major carriers in the telecommunication industry. Mr. Turrisi previously served as the director of operations for Connectivity Solutions Incorporated from 2008 to 2016.

Beginning his career with his father’s construction company, Mr. Turrisi was ultimately assigned to work for a communications project and found himself drawn to that respective career path. Having amassed more than 40 certifications in various aspects of his trade, ranging from engineering to construction, he attributes his current success to his professional staff and his inner drive. Mr. Turrisi also endeavors to provide his family with a better life through his professional accomplishments.Notably, Mr. Turrisi’s company was lauded as 189 in Inc. 5000 ranking of the fastest-growing companies of 2020, an accomplishment of which he is incredibly proud. As his company grows, he would like to expand his business into multiple markets and ultimately triple in size. Also noted as a considerate employer, Mr. Turrisi would like to help his employees receive a financial retirement plan and a sustainable future in the company.